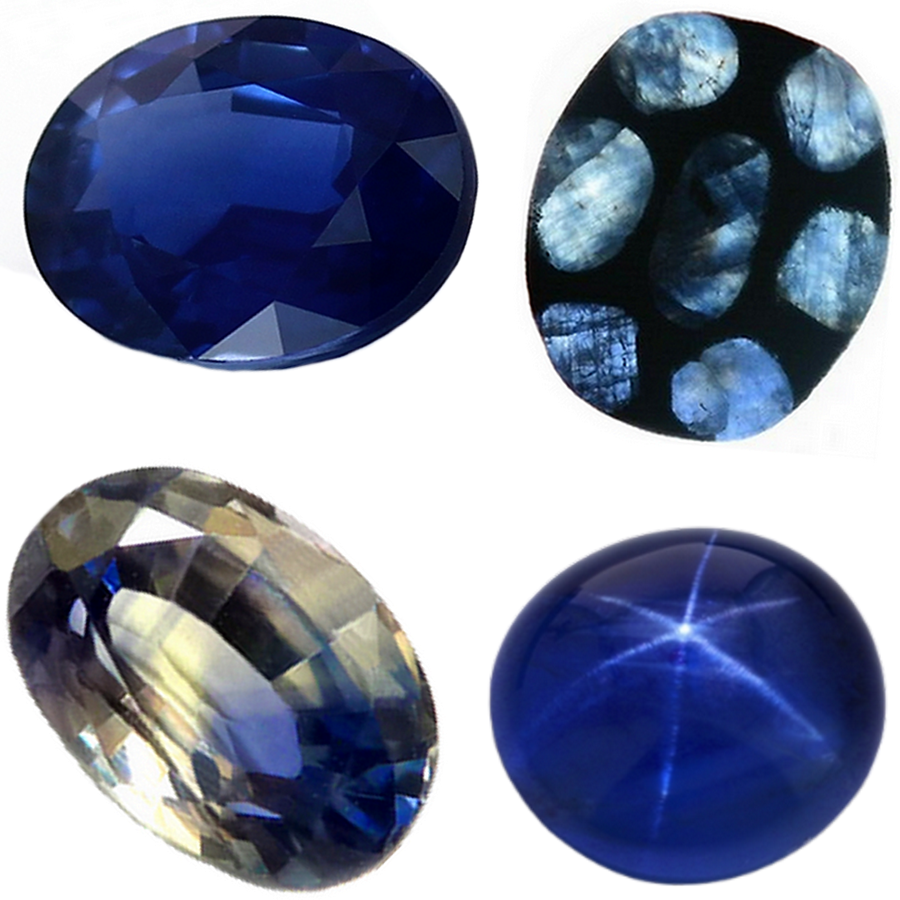 The " Stone of the Popes ", the sapphire and its deep blue but not that …
Discover in this guide a multitude of tints, invaluable information and a pretty shopping-list.

A little history...
As the ruby, the sapphire belongs to the family of corundum. The most beautiful sapphires come mainly from the Kashmir(Cashmere), Sri Lanka, Myanmar (ex-Burma) or the Tanzania, we find also of less beautiful but in larger quantity in Cambodia, Kenya, China, Australia, Madagascar, Thailand or in the USA (Montana).
Among the more famous sapphires include the Star of India, probably the biggest star sapphire of 536 carats never cut and Midnight Star, a black star sapphire of 11 carats.
The sapphire symbolizes the faith, the truth, the sincerity and the loyalty in relationships, this gemstone is supposed to bring peace, joy and wisdom. it is probably for these reasons that the sapphire often adorns engagement rings. Throughout history, one used sapphire as a talisman against evil spirits and to protect travelers and researchers. The Persians believed that the earth rested on an immense sapphire the brightness of which gave the color of the sky and the Buddhists confer it powers facilitating the concentration and meditation and protection against the bad luck.
Its blue, celestial and sacred color, and the fact that this gemstone is repeatedly evoked in the Bible (the tables of 10 commands would be in sapphire) makes of the sapphire a episcopal stone very sought by kings and popes.
And to close this long list of beliefs on this stone, one also lend it the powers of cure of the rheumatisms, the protection against the stings of scorpions and snake bites, ' Stone of eyes ', he would preserve them from dust and impurities. One believed so much in its power of cure that in 17th century one used it to look after the wounds of lepers (gasp!).

THE COLORS
If the blue is the color the most known for the sapphire, it also exists in a big variety of tints, pink, yellow, orange, purple, black, green and even colorless … Except the red because as written above when a corundum is red is a ruby! 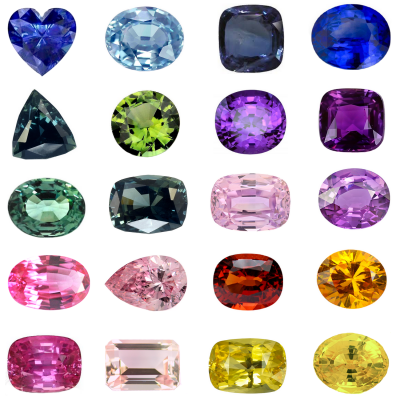 THE TREATMENTS
An estimated 90% of sapphires on the market are embellished by a thermal process. The stone is heated, generally prior to size in order to improve its color and its appearance. This method, commonly used and authorized, imitates only nature and helps to market some stones of qualities.
On the other hand the treatment by broadcasting or by process VERNEUIL, treatment consisting in colouring certain sapphires of low qualities (sapphires named GEUDA), is only tolerated and must be necessarily specified on the invoice. This process is totally artificial and especially superficial due to the use of coloring agents of sapphire broadcasted during the putting in fire chamber on the surface of the carved stone. This treatment gives to the sapphires of the very intense colors and certain obtained tints do not exist in the natural state but it abime or destroys the structure of the gemstone. Many orange sapphires are treated this way. Namely that a serious trader will not tolerate this kind of treatment because the stones are no longer considered natural.
THE CUT
As for the other precious stones, we find for sapphires, the sizes schematized below. The most common sizes for jewelry are the oval size, the cushion and the round.
The cutting with facets is generally reserved at the most beautiful sapphires. For the sapphires of less beautiful quality, possessing too many inclusions, lacking even opaque transparency and a too much darkened color, often it is the cut in form "cabochon" that is used. This the same cut "cabochon" that will reveal the beauty of star sapphires.

ESTIMATING
As for the other precious stones, the value of the sapphire depends on its purity, this value falls according to the number of inclusions or if a colored veil appears or not. It is also necessary to judge its color, she must be lively and supported, but neither too pale and nor too much darkened. It is also necessary to take into account in this estimation the quality of the size and the developed treatments. Any stones has to have a certificate mentioning the characteristics of the stone, based on the usual techniques of expertise and on the application of international standards of gemology. In the same way as the diamond, we use the method of 4C: Color ( color), Clarity ( purity), Cut ( cutting) and Carat weight (weight in carat).
( See → the 4C of the diamond) 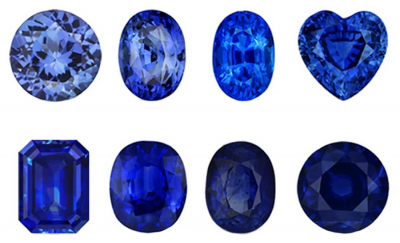 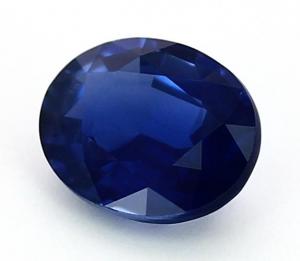 A little more low on the scale of values were coming the ' sapphires of Ceylon ' (Sri Lanka), and those of Madagascar. But today Sri Lanka and Madagascar produce most of the most perfect sapphires of the market. And for Sri Lanka, we find one of the most sought and the rarest sapphires, the Padparadscha. Subtly colored with a mixture of pink, orange and with yellow. In the same valuable scale we also find the sapphires of Thailand (region of Kanchanaburi) and of the Cambodia (region of Pailin) renowned for their deep blues. The Tanzania as for it, ancient and renowned producer of sapphires of colors except the blue sapphires, begins too the production of this bluish gemstone after the discovery of deposits in the South. 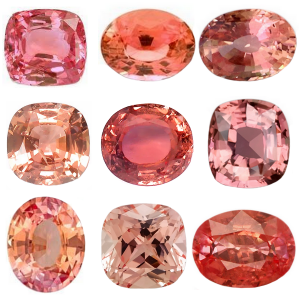 One of the most sought after and rare sapphires, Padparadscha, can be found in Sri Lanka. Subtly colored with a mixture of pink, orange and yellow, its colors close to lotus flowers gave it its name (Padma = Lotus, raga = color). Padparadscha is the only sapphire to have its own variety denomination. 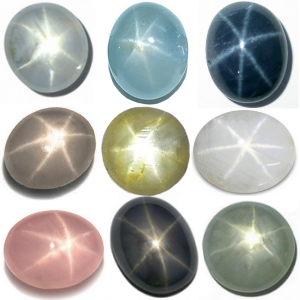 The sapphire sometimes contains inclusions of Rutile.The rutile is a very fine form, needle of dioxide of titanium which gives a milky aspect at sapphires and a reflection in the shape of six-point star, brilliant and unstable according to the lighting on its surface. There are sapphires with 4 or 12 points (rare) and also any sapphires at double stars. The lapidaries have for habit to cut it in cabochon to accentuate the effect of asterism. It is rather rare to find studed sapphires good quality and numerous imitations circulate on the market.
SAPPHIRE TRAPICHE/span> 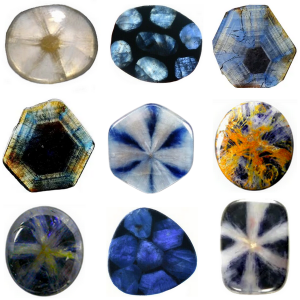 The shape " trapiche " was discovered first of all on emeralds coming from Colombia. But this shape also finds itself on certain corundum as the sapphire. The trapiches sapphires present geometrical figures in triangles and several tints and color. These figures are due to a stronger concentration in chemical elements in certain parts of the gemstone.
TWO-COLORED SAPPHIRES 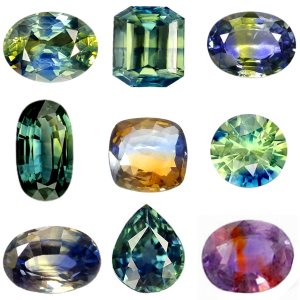 Depending on the coloring elements present in the gem, the sapphire takes on different colors. If the stone has two very distinct colors, it is called a two-tone or polychrome sapphire. Two-tone sapphire is rarer than monochrome sapphires. 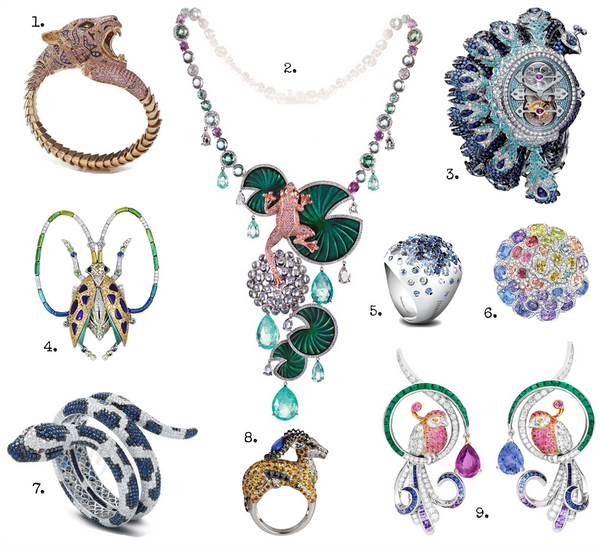 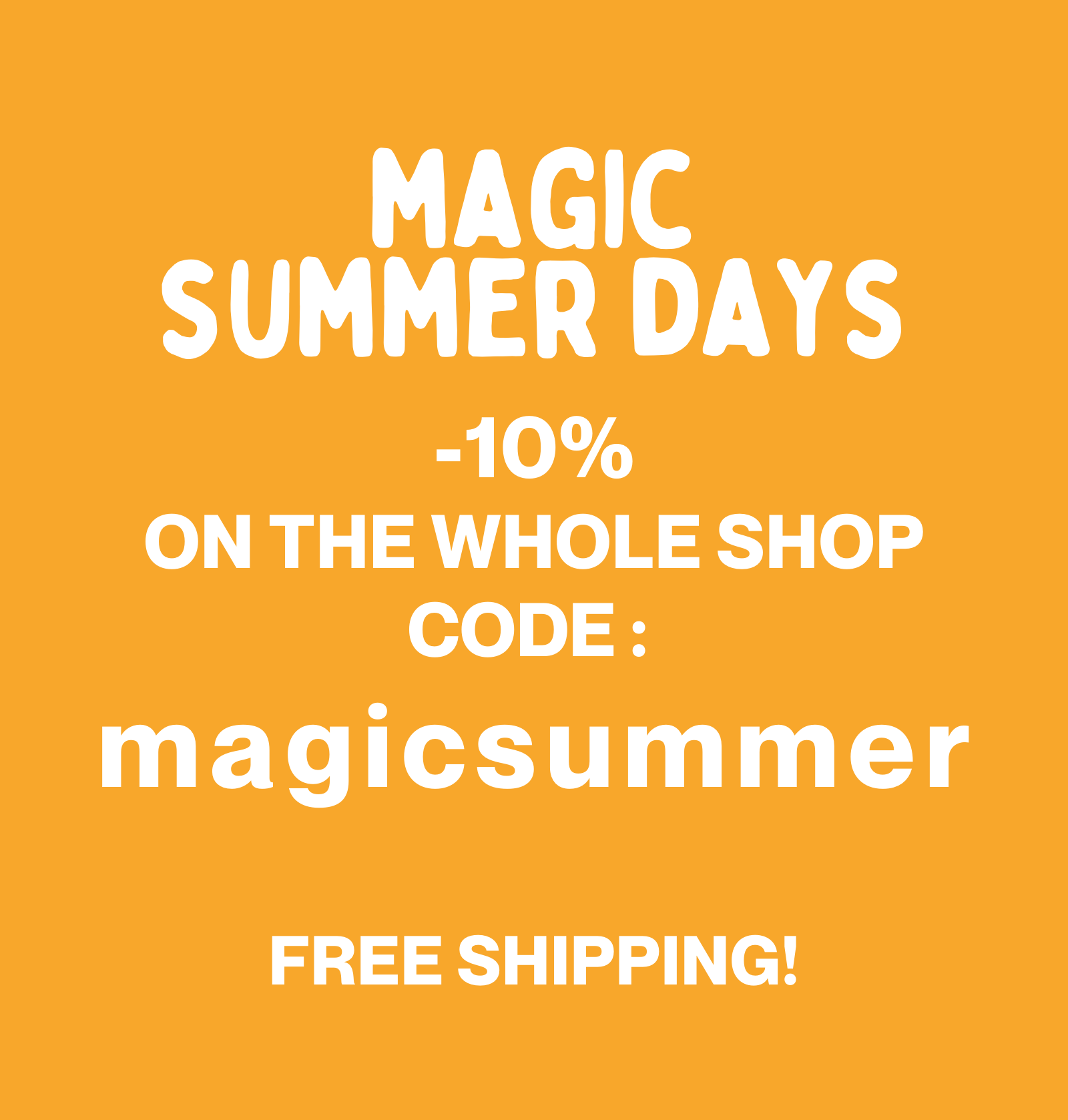 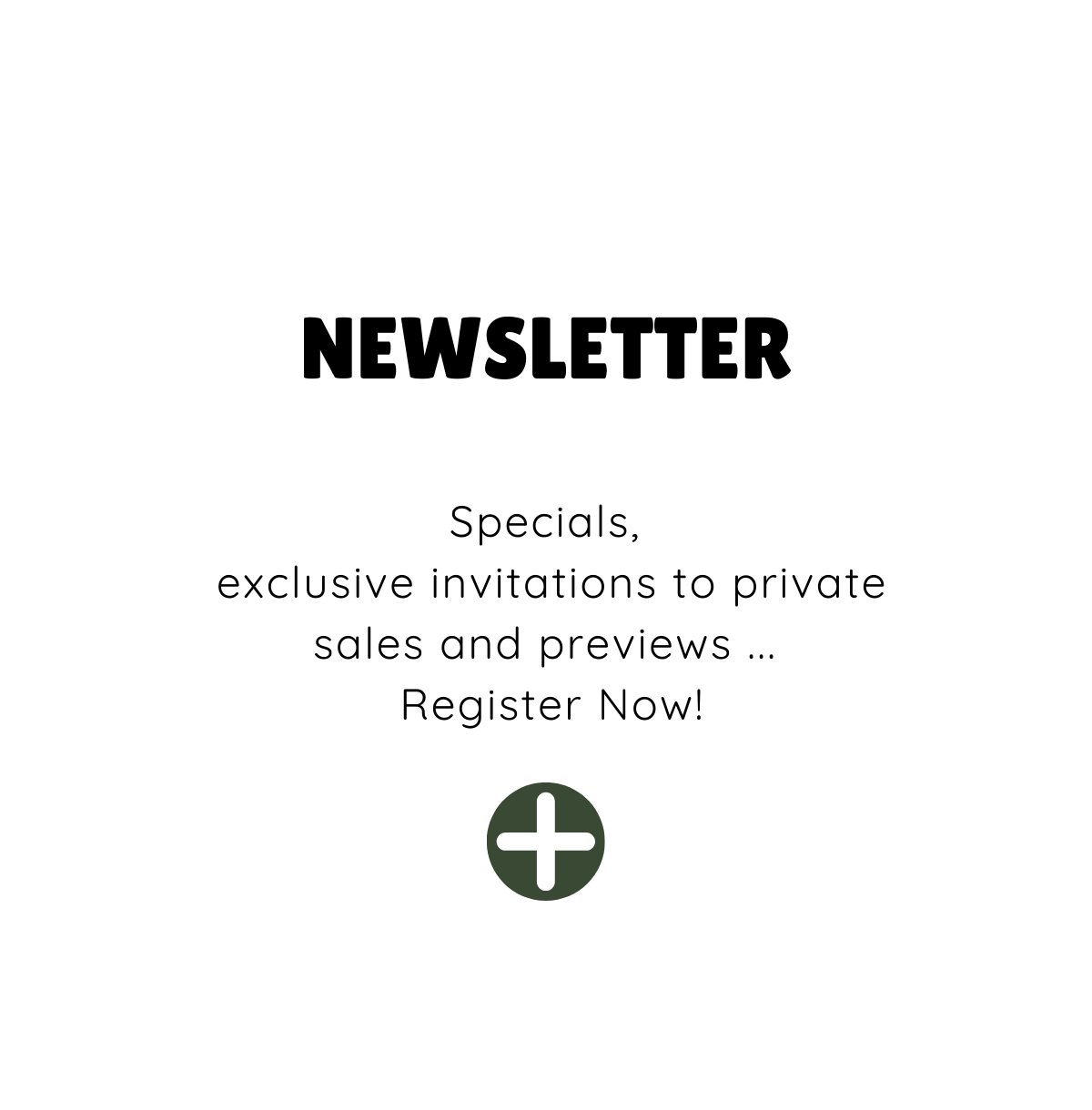